So far our narrative has explored the core foundation of Being. The reality of Being is an experienced fact, the most central Truth we know. It is our factual grounding for a Humanist ethics, morality, religion and spirituality. Regarding week one’s subject: everyone has it.

Two definitions are in order. I define the words “religion and “religious” as per the original Latin words re (to look upon all things) and ligare (to bind together, as a ligament does). A careful examination of the history of religion in its various forms reveals that a primary aim of religion is to explain all things in a way that allows us to live in conformance with pervasive and overarching truth. People crave a sense of orientation and we seek complete systems to that end. We would be hard pressed to live productively without a sense of place and orientation. This explains why religion is so pervasive. But while theists posit the existence of a god or gods, we Humanists seek an ordered system for living: this is not to say the theistic religions do not do this, too, only we do not impose a mediator, which to our eyes only confuses the matter. Our system includes art, science, history – everything. That is what makes it religious. [See Webster’s English Dictionary under “religion ” and Oxford English Dictionary under “rely”.]

So how do we move forward, in other words, how shall we live; and in particular, how do we construct and abide by a moral, ethical, religious and spiritual system? “You cannot derive ought from is.” Broadly construed, the statement is true enough. Human Being is rooted in a brutal evolutionary past, and although we are a social species capable of altruism, we are also a species with a demonstrated capacity for callousness and brutality. If someone objects to a universal ethics, saying “I will be better served by serving myself; if I take advantage of others when I can get away with it, I will come out ahead”: no proof to the contrary is available, or at any rate may suffice.

On the other hand, a universal ethics, morality, religion and spirituality is not arbitrary either. It is firmly grounded in the reality of Being, the life experience that is the essence of meaning. Because each of us values our own life, we have an idea how other people value theirs. That is what makes “do unto others as you would have others do unto you” possible.

A universal ethics is a choice. Our Humanism makes two basic choices.

One is a belief that the ethical, moral, spiritual and religious universe – the universe of Being – is wholly contained (as far as we know, and therefore as far as we presume to say) in mortal life as we experience and observe it. We neither posit nor concern ourselves, for ethical or moral purposes, with the question of an afterlife. At best, this question is a guess, at worse it is a diversion into wishful thinking and at worst it is an invitation, which many have taken, to violent division. Even if we are wrong, we still are best served by assuming that this life is all there is: it is all we know to exist, and therefore is all we can effect in any predictable way.

The second is that every human being’s life is as important as every other human life. No exact or mathematical formulations can be applied to this. My life is infinitely valuable to me, yet I would willingly give it to save the life of another or in defense of an important principle like freedom. We see conflicts like these constantly in our lives and in the world, and we will encounter them throughout our narrative.

The essence of these two choices, taken together, is that we choose to honor and respect others, not just ourselves. Historically this is not an arbitrary choice; functionally it is not arbitrary either. Societies function best when their members cooperate with and support each other. People do better in supportive groups than in cutthroat groups. The question is not whether a universal ethic is better for all of us – clearly, it is – but whether individuals will choose to ignore the common good and go it alone; whether it is better to live as a functioning member of society or not. We say it is better to respect and honor everyone.

We are in excellent company making these choices. The American Declaration of Independence includes the statement: “We hold these truths to be self-evident, that all men are created equal . . .” The Preamble to our Constitution, adopted in 1787, reads, in its entirety: “We the people of the United States, in order to form a more perfect union, establish justice, insure domestic tranquility, provide for the common defense, promote the general welfare, and secure the blessings of liberty to ourselves and our posterity, do ordain and establish this Constitution for the United States of America.” The American founding principle is a universal ethics.

Each of the world’s major religions endorses a universal ethic, suggesting that it is no mere cultural construct, but a product of our evolutionary past. [Donald W. Pfaff and Edward O. Wilson, The Neuroscience of Fair Play: Why We (Usually) Follow the Golden Rule (Dana Press, 2007).]

How important are these statements in their respective religious traditions? “This is the law and the prophets.” “That is the whole Torah.” “Is there any single saying . . .” “No one of you is a believer until . . .” “That nature alone is good . . .” This single statement sums up the whole of religion, insofar as religion addresses our treatment of each other. Once it is accepted, everything else follows, including our obligations to improve ourselves and make ourselves useful in the world, whether by being teachers, parents, scientists, cooks or garbage collectors; for by our actions we express our commitment to ourselves and to the lives of others.

Many people say this simple statement is inconsequential. On the contrary, think of the suffering caused by nationalism, racial, cultural and ethnic division, and discrimination by gender, age and life style. If we eliminated these, we would transform the world. This is the Word, guided by the Spirit of our common humanity, by which we choose to live.

The American narrative is a story of gradual, painfully slow progress toward a universal ethics. Like our other narratives for this week, it is told, as it must be, in the breach as well as in the practice.

People have spoken and written of a universal ethics, but we have not consistently lived it. In the United States, for example, the Constitution that proclaimed a commitment to the general welfare allowed slavery. The Native American peoples would be decimated over the next century. Women would not be allowed to vote for another 140 years. Asian peoples would be treated as second-class citizens for 150 years. In an eloquent presentation during the Nixon impeachment hearings in 1974, Barbara Jordan, a black Congresswoman from Texas, observed:

Earlier today, we heard the beginning of the Preamble to the Constitution of the United States: "We, the people." It's a very eloquent beginning. But when that document was completed on the seventeenth of September in 1787, I was not included in that "We, the people." I felt somehow for many years that George Washington and Alexander Hamilton just left me out by mistake. But through the process of amendment, interpretation, and court decision, I have finally been included in "We, the people." [Barbara Jordan, statement to the House of Representatives, July 25, 1974.]

The United States has had heroes who led the nation out of its exclusionary past. Perhaps the greatest of them is Chief Justice Earl Warren. Still vilified by the American right wing long after his death, Warren presided over the judicial establishment of Civil Rights in America, the period when the nation finally took its founding principle seriously. Those who would prefer to proclaim their righteousness without living it still hate him, it seems, but so far his legacy has endured. 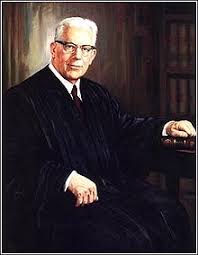 Other true narratives on universality:

As all men are alike (tho' infinitely various) So all Religions & as all similars have one source. [William Blake, "All Religions are One," Principle 7 (1788).]

You are right, sir, when you tell me that _Les Misérables_ is written for all nations. I do not know whether it will be read by all, but I wrote it for all. It is addressed to England as well as to Spain, to Italy as well as to France, to Germany as well as to Ireland, to Republics which have slaves as well as to Empires which have serfs. Social problems overstep frontiers. The sores of the human race, those great sores which cover the globe, do not halt at the red or blue lines traced upon the map. In every place where man is ignorant and despairing, in every place where woman is sold for bread, wherever the child suffers for lack of the book which should instruct him and of the hearth which should warm him, the book of _Les Misérables_ knocks at the door and says: "Open to me, I come for you."  At the hour of civilization through which we are now passing, and which is still so sombre, the _miserable's_ name is Man; he is agonizing in all climes, and he is groaning in all languages.  Your Italy is no more exempt from the evil than is our France. Your admirable Italy has all miseries on the face of it. Does not banditism, that raging form of pauperism, inhabit your mountains? Few nations are more deeply eaten by that ulcer of convents which I have endeavored to fathom. In spite of your possessing Rome, Milan, Naples, Palermo, Turin, Florence, Sienna, Pisa, Mantua, Bologna, Ferrara, Genoa, Venice, a heroic history, sublime ruins, magnificent ruins, and superb cities, you are, like ourselves, poor. You are covered with marvels and vermin. Assuredly, the sun of Italy is splendid, but, alas, azure in the sky does not prevent rags on man. [Victor Hugo, Les Misérables (1862), Letter to M. Daelli.]

Music is a universal language. Therefore, expressing the idea of universal inclusion musically may be impossible. If someone composed a work of music for every instrument, from every culture on Earth, it still would not capture the idea, except through our prejudices. However, we can pay due tribute to the composers and artists who have honored the ideal.

Debo Band’s deepest roots are in Ethiopia but their music draws on jazz and Latin influences, with instruments not usually found in this or any other popular music – like the sousaphone – and flavorings from traditions such as Klezmer. This is eclectic music for an eclectic culture.

Other works and artists:

Founded by Alexander von Schlippenbach, Globe Unity Orchestra does not necessarily sound like global unity but at least they titled their group that way. According to an article in Downbeat magazine near the time of its founding in 1966, it was comprised of musicians from several nations. The group creates excellent free jazz.

Ebo Krdum is a Sudanese-Swedish self-taught singer, guitarist, artist, actor and activist. He creates contemporary political afro-blues & afrobeat music rooted in several musical traditions around the sub-Saharan area (in his current projects). Ebo sings in many different languages and his lyrics mostly contain topics such as justice, peace, freedom, equality, diversity, revolution and liberty. He has released an album entitled “Diversity”. ”The lyrics that tell both Ebo´s life story and political topics such as equality, diversity and freedom, are sung in no less than eight different languages . . .”

Small Island, Big Song is a group of musicians from sixteen island nations of the Pacific and Indian oceans. They focus on preserving nature for everyone.

We are about to see that although capturing a universal ethic in music is a challenge, capturing its opposites is easy. The other entries for this week are mainly on the dark side.