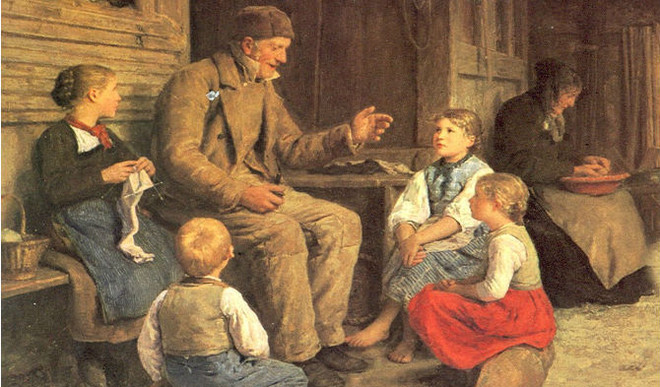 Humans are story-tellers. Our stories may be true, or they may be false; literal or symbolic. They are an integral part of being human.

Joseph Campbell brilliantly illustrated the power of narratives in his study of religious myths. Whether the stories were real or not, the storytelling was.

We are storytellers, who use music to tell our story, and create our stories internally. All of our music tells some part of our story. Even composers such as Edward Elgar, who strongly disdained “programme music”, drew inspiration for their compositions from their experiences and observations. That should be apparent in every musical work referenced in this book. This section will focus on works in which the composed made the narrative aspect of the composition explicit.

One time Tom sent a boy to run about town with a blazing stick, which he called a slogan (which was the sign for the Gang to get together), and then he said he had got secret news by his spies that next day a whole parcel of Spanish merchants and rich A-rabs was going to camp in Cave Hollow with two hundred elephants, and six hundred camels, and over a thousand "sumter" mules, all loaded down with di'monds, and they didn't have only a guard of four hundred soldiers, and so we would lay in ambuscade, as he called it, and kill the lot and scoop the things.  He said we must slick up our swords and guns, and get ready.  He never could go after even a turnip-cart but he must have the swords and guns all scoured up for it, though they was only lath and broomsticks, and you might scour at them till you rotted, and then they warn't worth a mouthful of ashes more than what they was before.  I didn't believe we could lick such a crowd of Spaniards and A-rabs, but I wanted to see the camels and elephants, so I was on hand next day, Saturday, in the ambuscade; and when we got the word we rushed out of the woods and down the hill.  But there warn't no Spaniards and A-rabs, and there warn't no camels nor no elephants.  It warn't anything but a Sunday-school picnic, and only a primer-class at that.  We busted it up, and chased the children up the hollow; but we never got anything but some doughnuts and jam, though Ben Rogers got a rag doll, and Jo Harper got a hymn-book and a tract; and then the teacher charged in, and made us drop everything and cut. I didn't see no di'monds, and I told Tom Sawyer so.  He said there was loads of them there, anyway; and he said there was A-rabs there, too, and elephants and things.  I said, why couldn't we see them, then?  He said if I warn't so ignorant, but had read a book called Don Quixote, I would know without asking.  He said it was all done by enchantment.  He said there was hundreds of soldiers there, and elephants and treasure, and so on, but we had enemies which he called magicians; and they had turned the whole thing into an infant Sunday-school, just out of spite.  I said, all right; then the thing for us to do was to go for the magicians.  Tom Sawyer said I was a numskull. [Mark Twain, The Adventures of Huckleberry Finn (1906), Chapter III, “We Ambuscade the A-rabs”.]